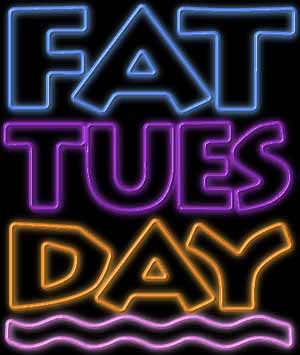 Here are a few facts about this day!  Enjoy


We all know that Mardi Gras involves parades, fatty foods and colorful beads. But not all of us know its actual history.
In the U.S., Mardi Gras has evolved to become a worldwide recognized holiday with people traveling from all over the globe to take part in the week-long celebration in New Orleans that includes masks, dancing, beads, parades and traditional foods like gumbo, King Cake and Paczki.
According to mardigrasday.com, the popular holiday began when a French king sent his men to defend the French territories in the U.S. As they began to inhabit Louisiana, they colonized an area they named Point Du Margi Gras. As the area blossomed, Mardi Gras (which is French for Fat Tuesday) became the name of the celebration the day before Lent began.

In essence, Fat Tuesday marks the last chance to indulge in sugary temptations before fasting begins on Ash Wednesday and lasts until the end of Lent.
Here's a fun fact: the traditional beads handed out during Mardi Gras - in purple, green and gold - actually hold a special meaning! The purple represents justice, green represents faith and gold represents power.

rather cool to know a bit more of the history! party on!

Cool facts! A co-worker brought in some King cake and fasnachts today. I couldn't resist!

My cousing lives in Metarie, a suburb of New Orleans. I used to go and visit her when I was a child into a teen...and I HATED that place...would only go because she was there. It rained everyday and there were so many mosquitos and it was so humid...and too many cars....I could go on and on...I would never go back. I'm glad she comes to see me. :)

It's always fun to learn a little history! Neat info, thanks! :)

Interesting...however, the week-long celebration in New orleans is not an event I would like to attend.