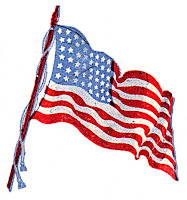 In honor of the 4th of July, I thought this would be helpful to know the proper etiquette of Our American Flag. You would be surprised of how many people have no clue.

Pledge of Allegiance to the flag; manner of delivery

The Pledge of Allegiance to the Flag, "I pledge allegiance to the Flag of the United States of America, and to the Republic for which it stands, one Nation under God, indivisible, with liberty and justice for all.", should be rendered by standing at attention facing the flag with the right hand over the heart. When not in uniform men should remove their headdress with their right hand and hold it at the left shoulder, the hand being over the heart. Persons in uniform should remain silent, face the flag, and render the military salute.

Time and occasions for display
(a) It is the universal custom to display the flag only from sunrise to sunset on buildings and on stationary flagstaffs in the open. However, when a patriotic effect is desired, the flag may be displayed twenty-four hours a day if properly illuminated during the hours of darkness.
(b) The flag should be hoisted briskly and lowered ceremoniously.
(c) The flag should not be displayed on days when the weather is inclement, except when an all weather flag is displayed.
(d) The flag should be displayed on all days, especially on New Year's Day, January 1; Inauguration Day, January 20; Lincoln's Birthday, February 12; Washington's Birthday, third Monday in February; Easter Sunday (variable), Mother's Day, second Sunday in May; Armed Forces Day, third Saturday in May: Memorial Day (half-staff until noon), the last Monday in May; Flag Day, June 14; Independence Day, July 4; Labor Day, first Monday in September; Constitution Day, September 17; Columbus Day, second Monday in October; Navy Day, October 27; Veterans Day, November 11; Thanksgiving Day, fourth Thursday in November; Christmas Day, December 25; and such other days as may be proclaimed by the President of the United States; the birthdays of States (date of admission); and on State holidays.
To all who may be reading this....HAPPY INDEPENDENCE DAY, MAY GOD BLESS YOU AND OUR GREAT COUNTRY!
Posted by Jan n Jer at 12:43 AM

Happy 4th to you too! Hope you are having a good time at Linda's!!

Happy 4th of July my friend! I lived overseas for many years, and during that time, July 4th was just another day. So I am always excited about the 4th. It reminds me that other countries do not have the tremendous freedoms that we have here. I hope you had a great day!

Thanks so much for taking the time to remind us how to respect our flag!
Happy Fourth a day late !
We have a great flag pole but the clips on it had broken. SO, I decided to replace them so we could display our flag. I was so careful to tie a knot in the end of the rope, but not as careful to keep that knot from traveling all the way to the top of the pole. Not sure who I can find to shimmy up that pole and retrieve the knot. Needless to say, our flag remains folded on the shelf and only a dangling rope hangs from the pole.

Hope you had a wonderful weekend. We did. me and the girls went and stayed at a beach house on St. Simons Island. It was wonderful. Hoping to go back again before school starts.